Sizzzle: Find food trucks near you

I biked from my home in Washington, D.C. to the National Mall, noticing, for the first time, the dozens of food trucks lined up by the Capitol and Washington Monument. Once I returned home, I looked up one of the trucks but couldn’t find any information on it. Unlike brick and mortar restaurants, it turns out that food trucks often don’t post their menus online, and they usually don’t tell you where they’ll be.

In the six months since then, I’ve built a database of over 27,000 food trucks from across the United States, Canada, the United Kingdom, and Australia — and attracted a healthy base of interested users. Now, I am gearing up to release a beta version of my app, Sizzzle, in April 2023.

My process has involved many prototypes and iterations. Since I began to work on Sizzzle, I have made minor and major improvements to the UI and backend I had originally envisioned. This iterative process was enabled, in many ways, by Kodika.

My introductions to coding and Kodika

In 2020, I decided that I wanted to make my own mobile apps. I didn’t know how to code, but I figured I could learn. And I did; watching online tutorials, I began to write programs in Swift and Python. But, using Xcode, I was struck by how long it took to develop anything functional. I had so many ideas — every week, I would come up with new features — and I wanted to implement them as quickly as they came.

After much Googling, I found Kodika. With it, I could make apps quickly, and I wouldn’t have to sacrifice the flexibility of Xcode and other platforms that involved writing real lines of code. As I learned how to use Kodika, I developed some of my ideas.

Throughout the learning process, I kept in touch with Kodika’s team, which was very responsive and went out of its way to help me understand the platform. They looked at my projects and provided specific advice on how to address the technical problems I was experiencing, going so far as to send screenshots and instructional videos.

I was encouraged by my experience, and when I had the idea for Sizzzle, it seemed natural to begin prototyping in Kodika.

I began by designing a user interface in Figma. Transferring the design manually into Kodika and using Kodika’s Figma plugin — which allows you to copy and paste your components — I reconstructed the interface. Previewing the app on my phone, I made improvements to the UI. 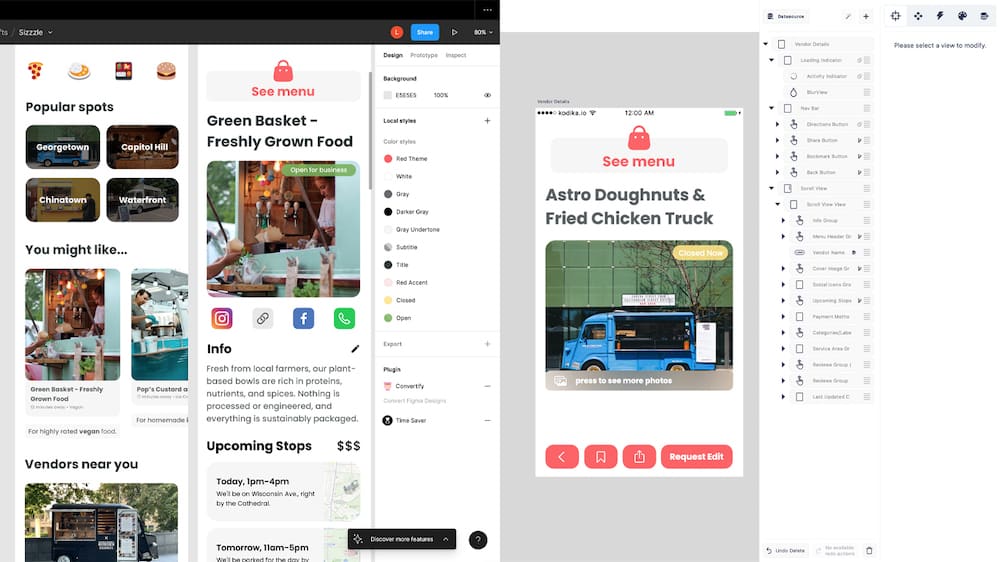 Transferring the design from Figma to Kodika.

Then, I began to create logic to load and format all of the food trucks. This was a matter of clicking different blocks together, so it wasn’t too difficult. By troubleshooting and observing which methods were fastest, I tweaked my code in real time to optimize the user experience. With Kodika, I came up with a working prototype in a matter of weeks, rather than months.

My experiences with Kodika have been great. I was able to quickly prototype my app and iterate, visualizing how to best code it and create an intuitive user interface. Plus, Kodika clearly isn’t just for prototyping; the platform allows for great flexibility, and you can certainly create full apps with it.

I did run into some challenges with creating my backend — which quickly became very complex — in Kodika. Ultimately, I coded the final version with Python as a REST API. However, trying out different operations with Kodika’s logic gave me the framework I needed to code it. Also, I think that many of the complexities of my backend, the ones that didn’t carry over to Kodika, were unique to my app.

Overall, Kodika is an excellent tool to quickly turn an idea into an app, and it provides plenty of features — allowing you to build many different experiences without the limitations of most no- or low-code platforms. While there are still use cases that require code, I’d recommend Kodika to anyone who wants to prototype or release apps quickly and efficiently.

If you’re wondering about what exactly Sizzzle is, it’s a mix between Yelp and Grubhub but for food trucks. Through Sizzzle, you can discover trucks near you, view their menus, and order online. 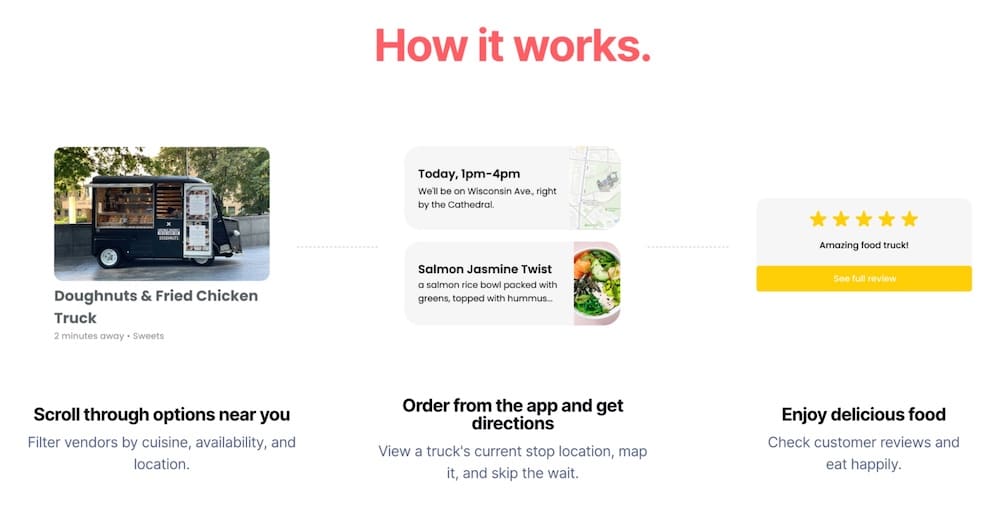 If you’re an enthusiast who wants to follow your favorite food trucks or someone who just wants to grab a quick lunch, you can learn more about Sizzzle or sign up for early access on our website: sizzzle.app.